The Mactan Belmont Luxury Hotel is primarily located in Mactan Newtown, Lapu-Lapu City, Cebu, Philippines. Mactan hosts the world-class Mactan-Cebu International Airport which is just a few minutes away from the Mactan Belmont Hotel. Mactan Island is separated from Cebu City by the Mactan Channel which can be crossed by two bridges. A third bridge is currently under construction which will further decrease travel time between Cebu City and Lapu-Lapu City, the city that hosts the Mactan Newtown.

But did you know that there will be a most-up-to-date educational institution in Mactan Newtown that will be run by Lasallian Schools Supervision Services Association, Inc. (LASSSAI)? In 2016, Megaworld opened the Newtown School of Excellence, a state-of-the-art educational institution supervised by the Lasallian Schools Supervision Office. This school is a fulfillment of Megaworld’s vision of building communities and providing empowerment for individuals, especially the children.

The great thing about the Mactan Belmont’s location is that it is just minutes away from the Mactan International Airport. This means that tourists need not travel far to check into their accommodations. From the airport arrival gate, guests just need to take a quick 15-minute ride towards the Eastern Mactan peninsula and into the welcoming arms of the Mactan Belmont. Not that many tourists will go out of their way to check into hotels or inns that are too far away from the airport, mainly because of convenience and also due to the fact that they would want to rest and relax immediately.

Aside from the airport, the Mactan Belmont is also just mere minutes away from the Angasil seaport. From there, you can take a ferry towards the neighboring island of Olango, which has some of the most beautiful beaches in the country, and possibly even the world. You can also take a longer ferry ride (around thirty minutes or so) to the neighboring province of Bohol. Just staying in the Mactan Belmont Luxury Hotel will open up all sorts of unique and enjoyable destinations and experiences.

Speaking of idea tourist destinations, Mactan Belmont is just a stone’s throw away from the iconic Magellan’s Marker. This marker is a grim reminder of the ill fate of the famous explorer and conqueror Ferdinand Magellan. After he successfully converted many of the native tribes people of Cebu to Christianity, he travelled towards the island of Mactan. However, the chieftain, Lapu-lapu came to meet the Spaniard and made sure that he never left the shore of the island alive. Numerous efforts were made by the Spaniards to recover the bodies of those slain during that battle but they were all thwarted. To commemorate the location where Ferdinand Magellan died, a marker was placed in the same location where he fell.

Now, if you want to go on a shopping spree while you are on holiday, you just need to ride a cab for around fifteen to twenty minutes to the main island of Cebu to find some of the best shopping destinations this side of the country. Right at the edge of the Cebu coast is the SM City Cebu, a vast shopping mall complex set on top of a reclaimed land. A bit further downtown and you will see yet another large mall, the Ayala Malls Cebu, where you will find high-end brands and products. There are many smaller shopping destinations around Mactan Island if you want to do something a bit more laid back.

Aside from the restaurants inside the Mactan Belmont, there are many other places where you can eat and drink as much as your heart desires. There are literally dozens of restaurants, bistros, bars, and even food carts where you can sample the local fare. You do not even need to travel far. There are plenty of establishments within a 2-block radius of the condotel.

The location of the Mactan Belmont is actually more than enough for most people to enjoy the most of their holiday in the tropical island. However, there are also quite a lot of nice amenities provided by the condotel itself, which is actually a trademark of Megaworld Corporation projects. 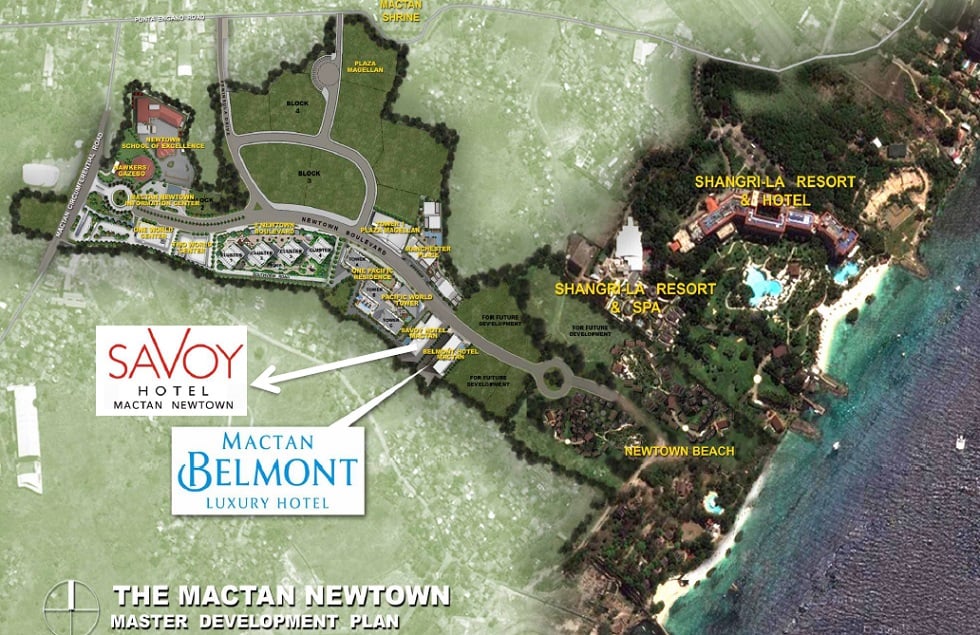